A New Site has been added to the side bar!

I am pleased to spread the word on the following website. It is a M/M only Booru (Forum for images only categorized by specific tags.) It's for artwork ONLY. Busts in manga, fan-fic, or whatever else. Anyone can upload, anyone can visit. It has A LOT of AWESOME ballbusting images. Here is a screenshot of the page. (If you want to just ignore this post, here is the link. http://mmballbusting.booru.org/index.php?page=post&s=list&tags=all)(It's also on the side of the page where the rest of the blogs are if you're on the computer. If you're on mobile, I apologize for the terrible format still, I need to work on that.)

As you can see, there are several pictures here. All of which are animated. You can click on any of them to open said picture it's own tab. If you're looking for something in particular, you can use the search on the side. You can either type into the search bar, or you can click on one of the tags. If you want a kick from behind, there's an option for that! If you want a squeeze, there's a tag for that too! Or if you don't care about the bust, but just want a hot guy bulge, there's an option for that too! A tag for multiple boys, a tag for fighting, brothers, etc, etc. It's very convenient. And here are a couple of my favorites so far. 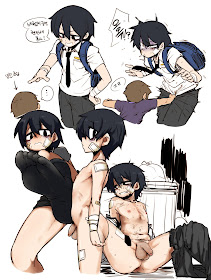 To those who are curious, the older is telling the younger he needs to learn to respect his elders. Which of course leads the younger to punching the elder right in his balls. A really great punch, I love his face as the small hand is buried in his crotch. Shade of purple, looks like he's sweating and going to be sick. And what makes this so awesome is the visualization of his big meaty balls and sweet flaccid uncut cock. Masculine body in a few different angles so you know exactly how this guy looks. I'm all for letting my imagination do the talking, but why bother when what's right in front of me is so damn hot? I love the mental image of that exact package getting smashed by the kids small fist. Really great little piece.

This next one is a 3 parter. The Booru has a bunch of comic strips/magna busts, some of which span over a few different parts. Creating a little cohesive story! Let's follow along here, shall we?


The kid thinks they're just having a laugh or something, but that idea quickly gets proven wrong.

Their faces answer are enough of an answer. They are totally going to ruin this kid.


The kid panics, and sends his hand down to protect his most vulnerable and important parts. His jewels. I love the dialogue here. The young man is cursing them out, because it's all he do. He's outnumbered, and they are going for his most sensitive parts. He's powerless. I also do adore how when he sends his hand down, it says "Protects!" just to add emphasis on his situation.


He slides down to the floor as the struggle and flailing continues. He's screaming at them, curing them out still. And the only comment they make is asking him to stop struggling because it's making it difficult for them to twist his testicles. How selfish of him. How dare he inconvenience them in such a manner?

Part 2 starts off with some other guy coming along, asking what's going on. The guilty party responds nonchalantly, like twisting a guys balls is no big deal. Just another Tuesday. I wish my Tuesday's were this fun.


The poor kid cries out for help as he's on the floor, his hand still trying to protect his delicate manhood from these 2 guys who really just want to twist his balls. I love how you can see his skin right above his pants. It adds an extra layer of hotness to an already really hot scene. And the view, with his hand in front of his package, covered only my track pants. Jesus, I fucking love track pants on guys.

The new guy seems mildly irritated with how the two are acting. Very brash, to the point. Acting like this in what appears to be the hallway of a school.


Then he walks closer, with his hand reaching down....


And he mentions how... interesting... the scene is.

The look on this guys face is awesome. He thought he found an ally. Someone to save his balls. But no. He wouldn't be that lucky, would he?

He offers them money if he lets them go. But it's made clear, they don't want money. They just want his balls. I mean, look at their faces. They look so twisted, fixated.

And they found his balls. You hear his scream, and you see the caption of the twisting. The new-comer, despite his curiosity, finds the two boys who are doing this to the poor kid to be somewhat terrifying. He certainly won't be fucking with them, that's for sure. And bonus points for the two girls who are walking by at the most perfect time.


Here you see the effects of the ball-twisting. Poor guy with a hand buried in his crotch, you can see his tighty whities sticking out too. So you know it wasn't too hard for the two to find them. He's shaking, speechless. Hiding his face, his humiliation.

The guy who walked in offered the humiliated hottie some help getting up. To which he responded "Fuck off... you are fake and sinister..." Can't really blame him for that response. He just called two perverts twisted his balls in the middle of the hallway to be interesting. And he's still worked up over it, as you can tell by him shaking.

Apparently he got what was coming to him. I'm sure our friend on the floor won't take kindly to this accusation.

He then adds on, by saying how him laying there on the floor pisses him off. Right after his balls got twisted. Like the poor kid has any choice in the matter. And the response is very understandable. He asks why it should matter? Which is a good question. He also gives him the middle finger it appears.


Actions speak louder than words however. The fake sinister kid grabs the poor kid by the shirt. This isn't good news for our floored friend.

Threatening him? How can you threaten him? He just got his balls twisted. What could possibly be worse...


Of course! Grabbing his balls could make it so much worse! His legs are flailing, he's struggling as his manhood get's invaded by someone's unwanted hand once again. This is not a very fun day for our friend here. Fun for everyone else. But not for him. But I for one, am appreciate of his sacrifice!


These are the sorts of things that can be found on this M/M Booru. Link is here:

It's also on the sidebar!

Huge thanks to whoever put this together. It's an awesome collection with so many great additions. And again, anyone can upload! But please be respectful. M/M only, and animations only. I hope you guys enjoy this website as much as I have! Until next time, enjoy yourselves!